Directed by Palermo-born﻿ Giacomo Costa﻿, Amuri is a year's journey through the colorful cuisine of five religious festivals across the island. This is a Sicily rarely seen by outsiders, a Sicily where it is the bread-kneading grandmother and the village priest in the camera’s focus. Amuri is an intimate portrait of the culinary and religious traditions at the center of the Sicilian spirit, traditions that have outlasted centuries of invasion, earthquake, and corruption. From the sculptural village breads of Saint Joseph day in March, to the castanet-like clatter of snails cooked in Palermo for Santa Rosalia in July, the documentary takes viewers on a mouth-watering tour around Sicily. ﻿

Thank you to all your support, we've successfully surpassed our fundraising goals in two Kickstarter campaigns, raising over $34,000 to carry out the filming, editing, and promotion necessary to bring this film to people like you. 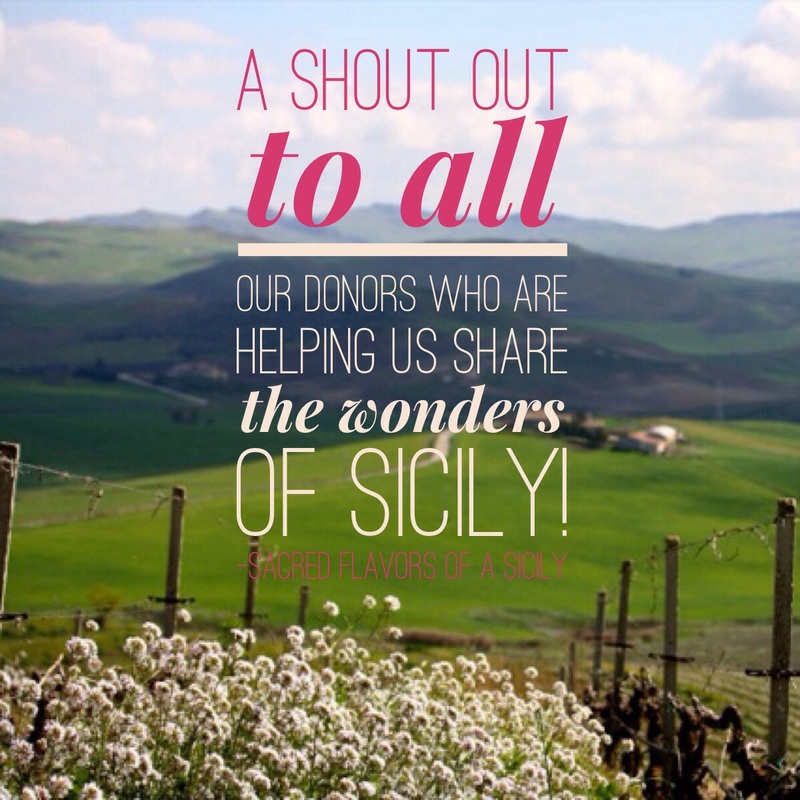 Initially funded by a successful Kickstarter campaign in the spring of 2013, this film project is the brainchild of Fabrizia Lanza,
owner of the world-renowned Anna Tasca Lanza Cooking School in Sicily, located on the Tasca d’Almerita Regaleali Estate,
a winery and farm that has been in the family for generations.  The school was founded in 1989 by her mother, Anna Tasca Lanza,
who wanted to preserve the culinary and agricultural traditions of Sicily and to respect the natural landscapes she loved deeply.
The school has brought people from around the world, including famous chefs and slow food advocates like
Alice Waters, Jamie Oliver, Julia Child, Bobby Chin and Gary Rhodes.

Fabrizia also heads the Natura in Tasca line of sustainable, slow food Sicilian products,
which we featured in our Kickstarter prizes for our second spring 2014 campaign.

Sicilian religious festivals contain the food traditions in Sicily that are becoming endangered, though there is hope on the horizon if projects like this can show how important these culinary legacies are to our land, our economy, and our society. By creating a truly beautiful film and sharing it in Sicily and around the globe, we hope we can help them stay alive.

To film these festivals, we travel to every corner of Sicily, from the modern city of Palermo to the ancient Greek city of Siracusa. From small towns near Mount Etna to the mountain villages in the center of the island. We go as far south as the remote island of Pantelleria, close to the coast of Africa, and as far north as the island of Lipari, in the Aeolian islands. We want to portray not only the culinary and cultural variety in Sicily, but also the great contrast in landscapes and agriculture.

This is a uniquely Sicilian story, but one that is analogous to the so many narratives playing out on every continent at the moment. We’re at a crossroads, deciding whether these ancient, slow food traditions are a vital part of our future... We think they are. If you agree with us, please consider contributing to our project!

Thanks to your support, we raised $18,510 in our most recent Kickstarter Campaign.  Kickstarter is an online funding platform for creative projects driven by an all-or-nothing rule. With the amazing help of almost 200 donors in two campaigns, we've raised just over $34,000, giving us the funds to film, edit, and produce this film so we can bring it to audiences by early spring 2015.

We filmed this autumn festival in a small town in southern Sicily called Favara and also in the big city of Palermo. The festival celebrates the fruits of the autumn harvest and the seeding of the wheat fields. Locals give thanks to God and their ancestors for the past year’s abundance and ask for blessings on the next year’s crops. After Sicilians clean and adorn the gravestones of their lost loved ones, they go home to treat their children to the traditional sweets of the festival, like La Frutta di Martorana(marzipan shaped fruits with local almonds) and I Pupi di Zucchero (incredibly-formed sugar puppets), after a dish of Fava Coniglio (seasonal fava bean stew).

We filmed this festival near Mount Etna, in a volcanic town called Belpasso as well as in the ancient Greek city of Syracuse. Saint Lucia is one of Sicily’s most famous patron saints, born in the 3rd century in Syracuse, and famous for her shining example of bravery and light in the darkness. Legend has it that centuries after her death, the spirit of Lucia saved Syracuse from famine by sending a ship of unground wheat. A ceremonial dish of called La Cuccia (unground, stewed wheat made sweet or savory) was born. The island honors Lucia by eating only foods without ground wheat, likeArancine (fried saffron risotto balls stuffed with a variety of seasonal fillings). Celebrated on the 13th of December, the festival is a mid-winter extravaganza, with community art installations, fireworks, and processions.

Carnevale, or Sicilian Mardi Gras, is the feasting and revelry that comes before the season of Lent. It is celebrated throughout February and March. For this light-hearted festival, we flew all the way to the remote Sicilian island of Pantelleria, closer to Tunisia than it is to Sicily. On this isolated, volcanic island, winter and early spring are times when tourists are gone and the close-knit communities have time to come together and prepare large meals and to dance late into the night at the small village dance halls. The Panteschi, as residents are called, make fresh Ravioli con Ricotta e Menta (ravioli stuffed with local cow’s-milk ricotta and fresh mint), Stufato di Maiale al Finocchietto Selvatico (pork stew with wild fennel), Mustaccioli (intricately carved cookies made with local honey, local citrus, and couscous), just to name a few of the many dishes prepared.

San Giuseppe is one of the most important festivals in Sicily, which honors Joseph and his fathering role in the sacred family (Joseph, Mary, and Jesus). In Sicily, communities gather together to prepare huge altars of devotion, covered with a myriad of different breads, cakes, sweets, and fresh fruits and vegetables. We filmed this remarkable festival in two agricultural towns in western Sicily, called Poggioreale and Salaparuta. Both were completely destroyed by a famous earthquake in 1968, and the haunting backdrop of the ruined old cities made a poetic contrast to the festival of springtime renewal and protective patrimony--showing the strength of Sicilian faith and community, despite adversity. For the festival, they prepare Il Pane di San Giuseppe and Cucciddatu (types of bread with wild fennel seeds, shaped into ancient forms), Scartucciato (large pastry forms filled with fig paste, carved into ornate, symbolic shapes), and La Pasta di San Giuseppe (pasta with tomato sauce, wild greens, wild asparagus, wild fennel, and local sheep’s milk ricotta).

We hope that this project can be added the ark of slow food techniques that can not only act as a snapshot of history, but can inform how we shape sustainable culture in the present and in the future. Most of all, we want to honor the communities and the landscapes that have given the world Sicilian cuisine, which is a treasure trove of wonderful food.